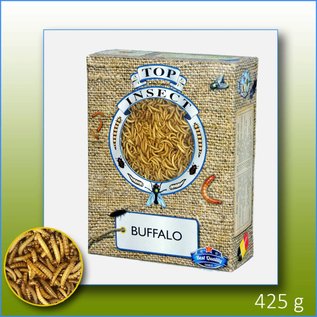 ONLY COLLECTION IN THE STORE !!!!!

The buffalo beetle (Alphitobius Diaperinus) is a beetle from the black-and-white family (Tenebrionidae). The larva is better known than the beetle and is called buffalo worm. The buffalo beetle resembles the flouredor (Tenebrio molitor) in form and behavior, but remains smaller. It is glossy black from the top, reddish brown underneath and the antennae and legs are brownish. The surface of the thorax has many rough spots.

The beetle and the worm are more common in nature in the southern regions of Europe and in warmer regions around the world. Their food varies greatly; they can occur in animal carcasses as well as rotting tree trunks and in grains. Their food consists mainly of the micro-organisms that occur on these different materials. Microorganisms, such as fungi, are very high in protein (just think of mushrooms). In commercial poultry farming, the buffalo beetle is often a pest because it affects the isolation of the stables, hence the popular name Tempexkever in the Netherlands and Isomokever in Belgium.

Add your review
0 stars based on 0 reviews