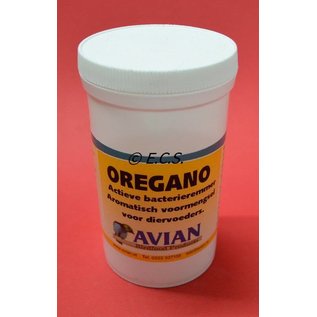 Avian Bird Food Products concludes that after several years of practical experience and by several parties, oregano extract a more than excellent asset to hold. Supply systems free of antibacterial / antimicrobial effect in the animal, but also in the feed

AVIAN ~ OREGANO is a natural extract of the Oreganum vulgare plant. The cultivation of plants and production of oil takes place under strictly controlled conditions. This completely under the control of
Dostofarm GmbH. Avian ~ oregano is thus traceable to the seed. Avian ~ Oregano helps maintain and restore healthy intestinal flora in a natural way.
It increases the resistance and stimulates repair your birds

Mechanism
AVIAN ~ OREGANO contains a number of highly bioactive fatty components which carvacrol and thymol are the most famous. From HPLC analyzes show that the natural oil extract still contains more than 200 different components (such as linalool, eugenol, terpinenes etc.) that together contribute to the unique properties of AVIAN ~ OREGANO.De most fat components present have a strong antimicrobial effect by the water management and disturbing. energy metabolism of the bacterial cell Avian ~ Oregano prevents and combats bacterial strains as: Salmonella, E. coli, Campylobacter, Pasteurella strains and streptococci. Many forms of fungi, and parasites such as coccidia trichomaden are not resistant oregano.

Several in vitro and in vivo studies report killing or growth inhibition of, for example,
Salmonella spp.,
Clostridium perfringens,
Eimeria spp.,
E. coli
and a variety of other micro-organisms

In addition to the strong antimicrobial effect AVIAN ~ OREGANO improves feed digestibility by stimulation of (saliva) receptors and stimulation of enzyme secretion. Recent research shows that the antimicrobial effect just mentioned the population stimulates lactobacilli and thus gives a lower pH in the small intestine; by this pH reduction improves mineral absorption.
A completely different effect is based on the support of the nonspecific immune system by influencing. Populations of white blood cells And certain fatty components an antioxidant effect and help protect. The body tissues in this manner

Effectiveness and application
Several experiments demonstrate the positive effect of AVIAN ~ OREGANO in antibiotic-free feed to. Results not only in improved performance, but also in a higher health status, lower drug consumption and improved manure consistency. Manifest themselves Moreover effectiveness against diarrhea problems caused by Clostridium perfringens and coccidiosis (especially poultry and birds) observed in practice.

AVIAN ~ OREGANO is best used as a supplement to provide it (seed) feed and / or the egg or rearing food. Can also be used during the rearing of the young.

Add your review
0 stars based on 0 reviews